Yesterday, I stopped in at Grocery Outlet on 4th St. in Berkeley. Grocery Outlet is a regional chain of closeout/overstock grocery items. If you grew up in the Bay Area, you may recall them as the "dented can" store. Odd things can show up at Grocery Outlet. For example, it's the only place in the western US where I've seen both Dreyer's and Edy's ice cream sold side-by-side. Anyway, much to my surprise, I found they had Zapp's Potato Chips. Zapp's are originally from Louisiana and don't usually show up in California. In fact, until yesterday, the only stores in California where I have found Zapp's were Cost Plus and Big Lots.

When I let friends know that I had found Zapp's chips at Grocery Outlet, one commented about their Voodoo flavor. The Voodoo flavor is a mash-up of several different flavors that (according to the description) was the result of an accident where an an employee spilled a pallet of spices, someone tasted the result, and liked it. It's one of my favorite chip flavors. 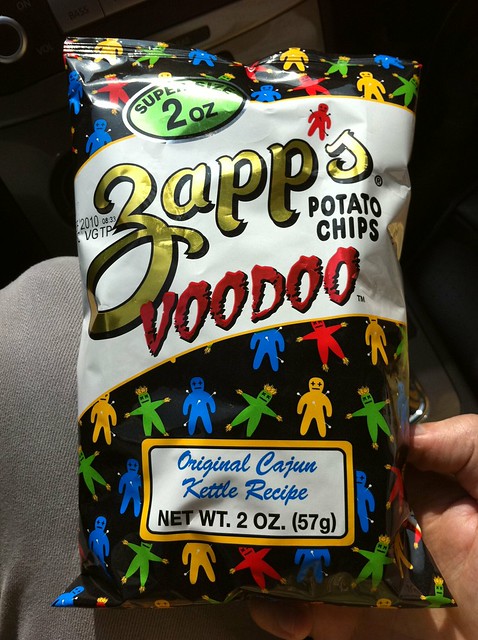 This made recall a similar flavor that I found when I was living in Los Angeles -- California Chips' "EARTHQUAKE!" (yes, all caps with the exclamation point.) 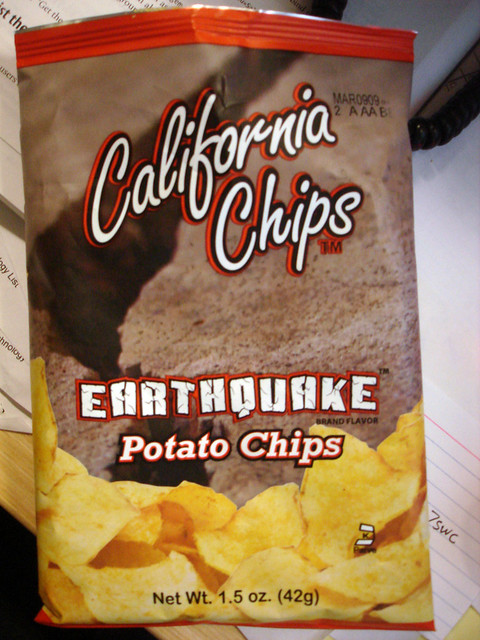 On the bag it said that the flavor was the result of a 6.3 earthquake near their production facility (in Oxnard) and that "When we came in the following morning all of our spices had fallen into the same mixing vat. We thought we had a loss on our hands but then when we tasted what we had, we loved it!" (I love the story; unfortunately, the chronological list of Southern California earthquakes shows that it's just a story.) When my wife and I first tried the EARTHQUAKE! chips, we both thought that they tasted like Zapp's Voodoo chips.

Until today, I had never looked into whether or not there was a connection between the two. The first thing I found was that California Chips no longer exists. The most recent update on the Internet Archive is from two years ago. An older version includes a news site that states that EARTHQUAKE! chips came out in 2005. Note from the archived "about us" page that California Chips' founder was Kevin Holden.

Two items of note from the Wikipedia entry for Zapp's:
Would that be the same Kevin Holden who founded California Chips? Ah ha! So it's not that they tasted like each other, it's that they are the same.
Posted by Sean Yoda Rouse at 2:47 PM